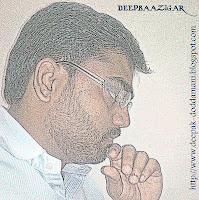 'Quotes by Deepbaazigar' series on my blog 'World of Deepbaazigar' is basically a compilation of some of my Tweets on Social Networking Website Twitter.
Based on my first 16 posts in the series I made a Pdf E-book
"Quotes of Deepbaazigar" and uploaded it on Slideshare at

You can embed this E-book on your Blog if you find it interesting enough.
This E-book contains 125 quotes by me. Majority of quotes are related to Entrepreneurship, Investment, Indian Politics, and Life in general.
I am continuing this series further and this post is my 21 th post in the 'Quotes by Deepbazigar' series.
1) There are only three types of rebels.
One - who can actually lead
Two - who thinks they can lead
Three - who dream to become leader
2) If you are married with your first ever love; and if you have profession which was your first ever passion; and still if you are not successful in both personal & professional life; then you are a challenging case-study for God himself
3) It will be interesting to find out how many PETA activists are actually really non-vegetarians and don't eat Meat or Chicken at all  :)
4) When someone cuts your wings, And you are not able to fly anymore. You must thank that personFor making you realize that You are a human being and you mustn't have wings in first place.
5) Cable connection without Set Top Box is equivalent to Life without Love; ekdum useless
6) No; we are not puppets with the strings in the hands of God. We are all Kites in the sky, with threads in the almighty's hands. He wants us all to fly, high up in the sky freely...But, we are the ones who cut each other's threads & push them on the ground.
7) When any relationship fails completely, it's always better to separate with dignity rather than playing blame game and regreting about it
8) The living legend Barack Obama gets re-elected as President of United States of America for the second time
Hopefully, he will not follow footsteps of our Prime Minister Dr. Manmohan Singh for second term. Both of them have really good first term