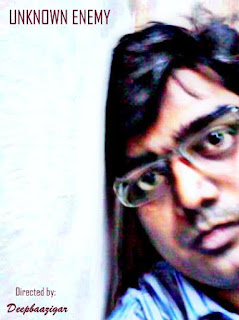 We have finished two schedules of shortfilm 'Unknown Enemy' so far. And interestingly none of us seems to be excited for the project. Thanks to Diwali. Team Ashwamedh is busy in celebrating Diwali, and I am wondering whether we would be able to complete shortfilm within time and be able to send it to the Shortfilm Festival for which we have specially started this project. Neverthless film-making process is really fun. But it also involves lots of hardwork. It's Ashwamedh Kalamanch's third only shortfilm which will more than 15 min. in length. Earlier projects 'Do not disturb' and 'Nakoshi' have been appreciated by the audiences but badly criticized by film-makers.Anyways who cares for them. We make shortfilms for our audiences who have been encouraging our group from the inception.
'Unknown enemy' is suspense film based on superstition and science.We are handling very important subject through this film. I have conceptualized this short film. I don't write any scripts, I just start with the project once and rest we do by improvisation technique, the way theater artists makes the dramas. I know for a professional short films you need good storyboard and screenplay written.But unfortunately none of us is professionally trained in film-making and so we work as per our understanding.
The first schedule of shooting took place at Virar on 6th Nov.and second in Grant Road on 11th Nov. We need 2 more schedules for completing the entire shooting. Next schedule is on 18th Nov at Virar again. Let's see I may share some more snapshots from the film before editing it. By the way; you can see earlier snapshots on http://www.ashwamedhkalamanch.blogspot.com and also like our page 'Ashwamedh Kalamanch' on Facebook.
On first schedule we completed scenes of Mysterious man played by Mithun Patkar and in second schedule we completed all terrace scenes on 7 floor building in Grant Road opposite Mukesh Ambani's house.
Mithun Patekar looks really awesome as 'mysterious person'; you must have a look 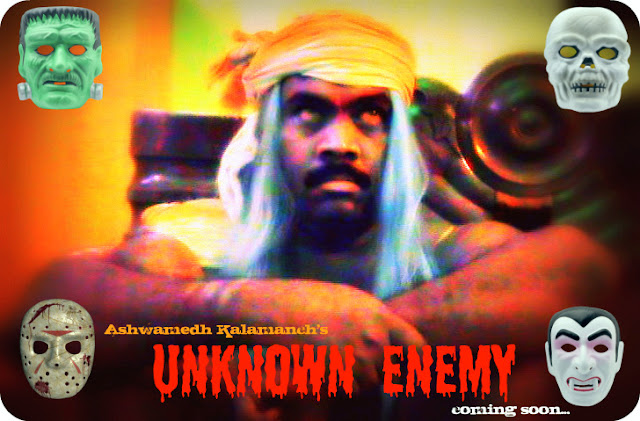 Mithun works in DHL. He had night shift before the shooting day but still showed dedication and worked from 11 a.m. to 7 p.m. with us on shooting day. Unfortunately after the shooting day he felt ill for almost 4 days but now has recovered from backpain.
Rakesh Dudwadkar is playing lead role in this short film. He is good in comic roles but he also does other roles equally well. I am directing the short-film and I always prefer to keep dialogues as simple as possible and scenes as natural as possible. I feel short-films should differ from films in all aspects including the way they are distributed. Neverthless I will write elaborated post about 'Distributions of Shortfilms and Indifame Media' in my other blog www.indifame.blogspot.com very soon.
I will share more about 'MAKING OF UNKNOWN ENEMY' in next post; till then ciao !