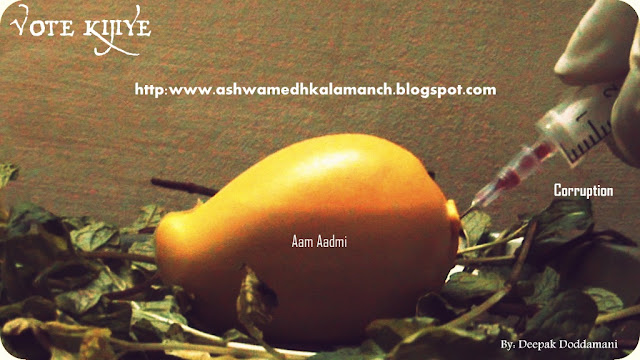 On 16th Feb we have B.M.C elections in Mumbai. The general trend of any election is most likely to be continued this time also. Only 40-45% people of India vote during election. But those who vote are real citizens of democratic India as they understand the real meaning of Democracy and value the power of right to vote. In Maharashtra the battle between Shivsena and MNS has become so fierce that Uddhav and Raj have not kept any stone unturned to throw mud on each other's character. Even Congress and NCP leaders are enjoying this tussle as they know that this fight helps them to divide Marathi people votes. Ramesh Kini's murder case has been came into limelight again after allegations of Chaggan Bhujbal on Raj Thackeray. The increasing power of Ajit Dada Deputy CM of Maharashta in NCP has already upset Chaggan Bhujbal; so mimicry of Raj Thackray was enough for him to vent off his frustration. Raj Thackeray of course trained by Balasaheb tries to imitate him in many ways including mimicry of Sonia Gandhi..lolz.
Keeping BMC election on Feb 2012 in mind, I decided to make an advertisement to make people aware of importance of election. 'Voting' is not only our right;it's our social responsibility' is the concept of this social advertisement. I needed a ripe mango for the same Ad. Unfortunately as there is no Mango in the Market in this season I had to use plastic mango for shooting. Yet it has been helpful as I didn't had to make any extra arrangement to put Red liquid (Mixture of Ketch-up and Kunkum) in the mango. We bought two syringe and hand gloves to suck blood (the liquid) in it. The Mango represents the 'Aam Aadmi' in this Advertisement. 'Wrong Turn' fame Abdul Hakim Ansari has acted in this Advt. The Ad has been circulating on Facebook with good response.
You too can watch this ad here and do give your feedback in the comments
Thank you....