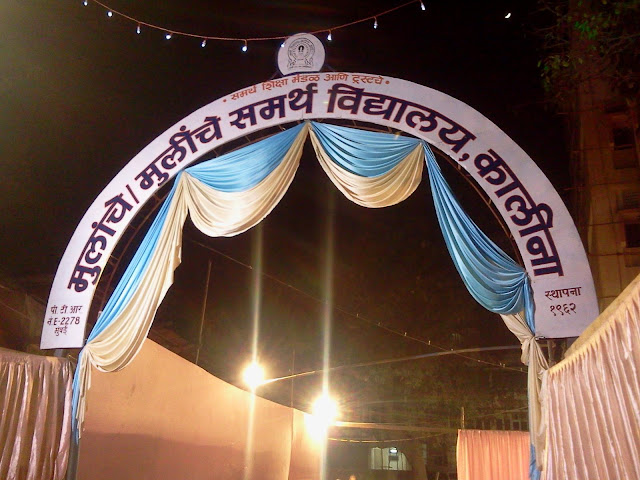 Ok, I am writing it now only because may be till tomorrow I will be out of his magic, may be till tomorrow I will miss some points.No I don't want it to happen.So here I am writing about the magical evening of today. Today I attended our school's Golden Jubilee function. I have done my Schooling from Samarth Vidyalaya, Santacruz (East). This school started in Dadar first in 1962 and then moved to Santacruz few years later. Many students of Samarth are now well established in their field of work. But like 'Shardashram' school is known as Sachin Tendulkar's school; our school is known as Nana Patekar's school.
Nana Patekar studied in Murud-Janjira till 4th standard before coming to Mumbai. He was very notorious student and was not in good company there. So his parents send him to Mumbai at his Mausi's home;so as to give him a good future. But within a year his Mausi changed his school and sent him to Samarth Vidyalaya, Dadar. Nana says mockingly,'she did it because she thought her children will get spoiled in Nana's company'. Nana's real name is Vishwanath Patekar. And interestingly he was known by his real name till entering in Bollywood.
Vishwanath Patekar aka Nana was Chief guest of today's function. But today he had not come there as Guest. He was indeed a student today and we were lucky to see his childhood through his own eyes. The reason was simple. As it was 50th yr of school all the ex-teachers, ex-principals  of schools were invited. Some of them were Nana's teachers and some his schoolmates who took teaching profession in same school. Fortunately today our school's first ever Principal Shri. Shriram Mantri was present to address all of us.When Nana Patekar was student of Samarth Vidyalaya, Mantri Sir was his Principal.
The program (as expected) started with praises for Nana. Everyone kept telling their experiences with school and Nana Patekar. All the retired ex-teachers and non-teaching staff got felicitated by Samarth Shiksha Mandal and Charity Trust through Nana's hands.Some other ex-students also expressed their feelings about school. But frankly the most touching part of event was Nana's speech. Everyone knows Nana Patekar as a great actor; a good human being and a manas-putra of late Shri. Baba Amte. But today we ex-students got a chance to meet student Vishwanath Patekar in him. At the age of 61 he is persuing rifle shooting which itself is a great example that how Nana is still a very good student and how seriously he takes his study. Before 'Prahaar' he had taken Military training and got rank too;that we all know.But at 57 he started rifle shooting and at the age of 61 he has  become expert in it...Simply Amazing !!
He was quite punctual and reached half an hour early to the school.He remained calm and composed throughout the function and made work easy for all the volunteers and teachers. He himself used to reach his elder teachers to felicitate them and help them climb the stage staircase. He was more like a son to his teachers and was controlling his tears throughout the function.He was quite humble and was really happy to see his teachers after such a long gap.Nana Patekar didn't allowed his aged Principal to walk to the diaz; he himself lifted the mike with stand and put it in front of his Sir for his speech. This gesture made atmosphere completely numb.


National film awards winner Actor and a well known personality of India bowed down to touch feet of our schools first peon Shri. Pandu Nitore and also told us , ''Pandu was my favorite person in entire school; as he used to ring the bell after school  time gets over and I would get a chance to get up from knee-down position before Girl's school starts''. Such a humble person he is that he didn't forgot to show his gratitude to non teaching staff of school. It's true that trees with many fruits is always down with its humility.After every one got felicitated it was Nana's turn to speak.

Nana Patekar's speech moved us completely. We all were completely lost in Nana's strong voice and his excellent thought process.His sense of humour made us laugh and we could feel warmth of his good heart. In short; he touched everyone's heart.
I will not discuss about his school experiences which he shared with us. I will not share how he praised his teachers or school. But I will share some of his thoughts which I liked during his speech.

He insisted that people like Baba Amte should get 'BharatRatna' because actors,players,politicians etc.earns money for their work. Even if they represents country they do it as their profession. But social workers like Baba Amte devote their life to society selflessly.

Nana Patekar is a good reader.He is poet at heart. He said Pu la Deshpande's characterization helps us to understand different people we meet in life. He also mentioned that Mumbai has lost its real people. The city has lost it's sensitivity in its pace. He substantiated his opinion by giving great examples.

Nana strongly believes in joy of giving. He understands that everything is temporary and everyone has to die sooner or later,so donate generously once your basic needs are fulfilled. He also gave his experiences about Baba Amte's 'Anandwan'. He said visit to such places is very important to understand, where we are standing and what we are doing in our life? He believes that the real success lies in making ourself better every day; so never compare with others.
He advised that we should not wait for tomorrow to pursue our hobbies as we can't do it once prime time of life is over. There is fun in accepting challenges of building your own empire rather than living in fore-father's property.The notes we earn should have fresh 'khamang' fragrance and not a stale suffocating smell.
There are many other interesting things he said in his speech. Let's see, I will try to get the video of his memorable speech from school and share it on my blog. Zee 24 Tass (Marathi news channel) has covered this event.May be you can watch it on News tomorrow. It was seriously a great evening for all of us who could attend today's function and listen to Nana Patekar's inspiring speech and simple philosophy of life.But above all the day was memorable due to the great Guru-Shishya relationship we saw today. I will conclude in Marathi that आज मी धन्य झालो !!