Making of 'Save the Elephants' 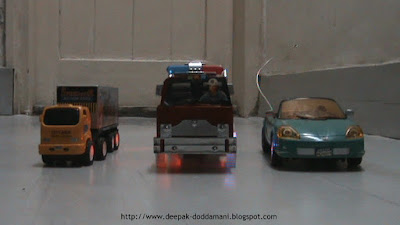 My sister and her son Aditya, both returned from Kolhapur as her Diwali vacation got over on 11-11-11. Aditya's dad had bought him a big long truck toy which he showed me the same day. Girls play with dolls but boys love gadgets and automobiles.My nephews did loved speedy cars which run by pulling backwards and setting free. But for Aditya more than speed, size of the vehicle matters. So this truck has became his favorite toy now.The sound of alarm and the lights make it a special toy.Due to it's size, I decided to make a video using this toy.I am a big fan of Golmaal series and the car stunts in Golmaal are too good. Children love to make stories using their toys and crashing toy cars thrills them too.

I decided to add an emotional angle to it. Children are sensitive and innocent. They do not have any fear,till we instill some. They find dinosaurs interesting and snakes beautiful. They do care for animals more than adults. I still remember how much we loved street-puppies in our childhood. We friends use to build home for them and feed them milk and bread pieces. So I decided to add an emotional end and give a social message that, 'save animals'. Wildlife conservation is equally important. India was considered as country of snakes, elephants and tigers.Unfortunately tigers are on the verge of extinction, hardly 1400 bengal tigers are remaining. Elephants are no less endangered. Hence I decided to do 'Save Elephants' campaign video.
Aditya was suffering from cold,so his mother wanted him to take rest.But he was not ready and came to me with his truck.I told him to bring some more toys and he did so. Then I took out  elephant (made of Plaster of Paris) from the showcase and Handycam from my cupboard. No tripod stand was required for shooting this video. I kept camera on ground and adjusted a frame in front of wall, as I needed some background for the video. Then I gave instructions; and he followed them properly.I had earlier made a short-film called 'Cartoon' on him, so I knew that he is Director's actor. It's really difficult to direct such a small kid. But Aditya loves to face Camera. He recognizes 'Ashwamedh Kalamanch' logo and knows that all our videos start with our logo. Aditya found it difficult to pick-up the heavy Jumbo, so he used to kiss it and keep straight on the ground down,so I was not able to catch his smiling face for longer time. I wanted to zoom camera on his smiling face with elephant in his hands; but he was getting impatient. Hence I edited the video as it is,without any retakes. The video can be considered as non-commercial advertisement, as without credits its hardly 30 sec video and with them it is 0.46 sec long. It's my first attempt to make such social advertisement. Earlier my students had made 'Wrong Turn'  a short film in interest of public.It is one of the most watched video on 'Ashwamedh Kalamanch' channel on YouTube. We are in process of making a short-film on 'Save the girl child'.
You can watch 'Save Elephants' on Ashwamedh Kalamanch blog. Please don't forget to leave comments. Thank you.