By Mr.DEEPAK DODDAMANI May 04, 2011
MAKING OF ASHWAMEDH KALAMANCH'S
HASYA JATRA EPISODE 5
Anant Chavan is a good director when it comes to prepare acts which has lots of energy and body language requirements. He has worked with many eminent Marathi stars like Satish Tare,Bhushan Kadu,Nirmiti Sawant and late Laxmikant Berde. The roles which he perfomed in his drama career were very small but all were comedy in nature.So the lessons of comedy which he learned from the directors like Purushottam Berde helped us at every aspect of Hasya Jatra.
Anant Chavan has worked with Laxmikant Berde in 'TUR-TUR', Nirmiti Sawant with 'Jau Bai Jorat' and 'Shyamchi Mummy' and with 'Bhushan Kadu' & 'Satish Tare' in 'Shyamchi Mummy'.He has also done a small cameo in 'Paichaan Kaun' drama. He left the drama field after he survived from the accident which occured with 'Shyamchi Mummy' unit bus several years back.His great escape from the death took him away from his drama career.His bended backbone never allowed him to work again in dramas where great energy is expected from actors.
Ashwamedh Kalamanch become his Second Inning platform as being senior he took lot of responsibility on his own shoulder. His experience and passion for drama were the main reason why I went ahead to take the risk of 'HASYA JATRA' production. Due to low budget and NO EXPERIENCE of entertainment field I relied on him entirely for the decisions regarding casting,script selection etc. From the first episode itself I was getting overwhelmed by his talent and wanted to see him act in some of the Webisodes of Hasya Jatra webseries.
But he refused,as he was worried about his weakness and ailing body.An actor can leave 'ACTING',but the 'ACTING KIDA' always remains there inside him and when the habitat becomes nutritional for that worm, he himself stands on stage 'TO ACT', Anant was not an exception.
Ashwamedh Kalamanch's Hasya Jatra Episode no.5
Anant and Abhijeet both were discussing scripts for next episodes. Abhijeet came out with Raja-Pradhan script. I was completely annoyed. I asked them this kind of acts are available everywhere on Television,why people will watch samething on internet with so much buffering problem? But,Anant liked the script. The act was quite longer and had covered many issues in it. So we decided to cut it short and show Raja-Pradhan acts part by part taking 'Single' issue at a time. The first issue which we chose was 'DISASTER MANAGEMENT' in India. The live example of Japan's great disaster management' was infront of everyone of us. So we chose to raise the issue of 'requirement of good disaster management techniques in India'. I have a permission to upload videos of more than 15 min. length on My YouTube Director's channel ( http://www.youtube.com/user/deepbaazigar  ) 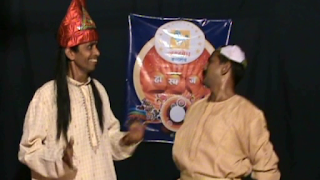 http://ashwamedhkalamanch.blogspot.com/2011/04/ashwamedh-kalamanchs-hasya-jatra_19.html
But we kept 10 min. as the maximum limit for Hasya Jatra episode as uploading to internet is lengthy process. So the act was cut in 5 min and with anchoring it reached 7-8 min.
The costume was made by myself using whatever is available at home. The hairs which we used for Anant were troubling him a lot during act yet he pulled act properly.Abhijeet was forgeting his lines so we had to shoot act in 3 patches. Abhijeet really did a good job as a 'Pradhan' in this act,but his voice was not clear at many important punches. Anant's voice quality and throw were perfect as King. The act got appreciated by many viewers as no one could realise how the crown of 'King' was made? When I explained them that it was cushion cover with 'Maa sherawali' cloth stappled on it,everyone laughed with amazement. I said with gimmick 'Kya kare,itne paiseme itnahich milega'. Crowd laughed again.
Guys thanks again for reading this post.Keep watching HASYA JATRA only on ASHWAMEDH KALAMANCH BLOG ( http://www.ashwamedhkalamanch.blogspot.com)
ENJOY !!!