When you search Google for Ashwamedh Kalamanch, you will come across 17,500 results of Ashwamedh Kalamanch and all belonging to us.Well that was the power of  Search Engine Optimization. Apart from India Ashwamedh Kalamanch Blog has really good viewer ship from country like USA,UK,Australia and several other countries.Thanks to all my UDCT friends who have settled all over the world and watching and sharing our blog on their FaceBook profile.
Third episode of Hasya Jatra was the most viewed episode so far on all three platforms. Deepbaazigar channel on YouTube, Dekhona and ofcourse Ashwamedh Kalamanch Blog (http://www.ashwamedhkalamanch.blogspot.com). There was nothing great about third episode.But the TIMING of the episode clicked.We released the episode when the HEAT of battle against corruption was ON. Ashwamedh Kalamanch's Hasya Jatra's third episode was dedicated to Shri.Anna Hazare and the India's battle against Corruption.
During the period of agitation against corruption we decided to show our support in our own way.
We had WEAPON of 'Hasya Jatra' which we decided to use.Some of our members criticized me as according to them the subject and script was quite serious and could not become part of Comedy Show.
But after long discussion we decided to go ahead with the Script. This was the first episode in which we had already written script in hand for shooting. The words which I used during the script writing were really hard for Rakesh and Sandesh (Govind) who both have studied in English medium school in their childhood. They took one and half day to memorize the script but still could not perform the Act in one Take. 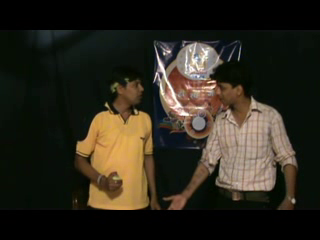 Rakesh Dudwadkar helped Govind throughout the act and somehow managed to complete the act before dark.Anant Chavan directed the act.When he saw that actor Govind was struggling a lot with sentences,he told me to shoot the act patch by patch and I agreed. The script was completely sarcastic in nature. We had not left any single corrupt politician and tried to cover all the corrupt departments of the country in 7 min. When I was writing this act,I was completely inspired from Marathi serial 'TICKLE TE POLITICAL' which I used to watch on regular basis (some years back).But I don't wanted to use 'Raja-pradhan' aur 'Gan-gavalan' kind of formats for this act, as I wanted this act to appeal youth.So we used IPL loving cricket-crazy fan with which youngster can easily relate with. We had to convince Rakesh to shave out his moustache. He didn't wanted to do so,as his 1st child naming ceremony was coming closer and his family would have scold him by watching him without Moustache..ha ha ha..I know it's quite illogical.When Rakesh saw his act he realized that he was really looking quite younger in this act and as per the requirement of character. The most catchy part of this act was 'MERA NETA CHOR HAI' campaign.Obviously I took this idea from campaign which I saw on FACEBOOK. Originality and Creativity are two different aspects.You need lot of skills to Creatively present STOLEN IDEAS :P.The comment which this video got on YOUTUBE tells everything about the impact of this act on Youth.

Fourth Episode of Hasya Jatra was completely dedicated to Naughty children. Ashish Chavan was just one week old in Ashwamedh Kalamanch team and we gave him chance to perform lead role in our Hasya Jatra promo which has already instilled confidence in him. The first act of Bandya and Chintya was quite hillarious as the punches in the act need quite mischievous and innocent child characters. We offered    Govind the character of Bandya initially,but he could not do it properly as he was feeling quite awkward to do childish behavior. Thankfully Rakesh decided to accept the challenge by himself. Initially I was hesitant to see 32 yr old Rakesh as 14-15 age child.But then somehow Rakesh gave full justice to character. The slapstick reactions which was expected from Ashish were not upto mark but as all important punches were given to Rakesh we were quite sure that act will be good.The addition 'Tuz uttar aikun maza sagla halla' by Ashish was really hillarious :)). The actors may not be good in delivering the original dialogs but are quite good in Adding their own lines during act :P.

Fourth episode has two acts in it.The second act of the episode was of Chintu and his family.Initially Rakesh and Anant wanted to play the son-dad duo.But I insisted Ashish to play the son and accordingly the dad's role was given to Shailesh More. Shailesh had never acted before.Rupali More, wife of Shailesh has interest in acting and the Mother's role was given to her. Shailesh had just came to watch the shooting along with his kid on that day, and we straightaway gave him Chintu's father's role.Anant Chavan had to work quite hard to make the couple act better.Rupali gave her best and saved her hubby in the act. The family made quite a good impression in their first act itself. 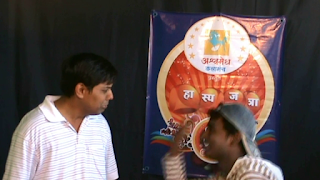 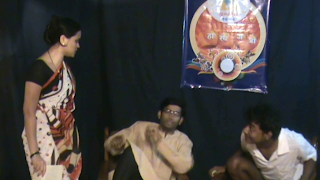 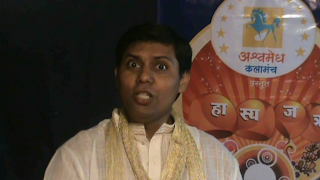 But the best part of the episode was anchoring by Rakesh Dudwadkar. Rakesh had really done a very good and confident anchoring in this episode. The shooting of this act was equally a great fun.
It was the best work of Anant Chavan as a Director so far.
More of Hasya Jatra in next post....